“Grab your coat,” Dad said. It was late. Something was wrong at the Keeners’– our neighbors, our friends.

Today’s story is from Gordie Zeigler. 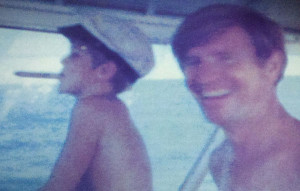 1974, “Piloting the boat with a cigar in my mouth. From the beginning, I wanted to be just like Dad.”

We climbed into our pick-up and raced to their farm. I was 10, excited, nervous and scared.

Dad was an intense guy—about people, work, whatever was part of his immediate sphere. He dove in when needed. He gave it all that he had.

We pulled up. Even before Dad shut off the engine, I could hear the screaming. We hurried toward the light streaming through the barn door.

Milt Keener was down on his knees. His back toward us, he was leaning over something—the source of the groans. His son Mike, my best bud and companion, stood over his dad with a petrified look on his face.

As we approached, I could see one of the Keeners’ sows—bleeding, shaking.

Her color was putrid and pale, her hind parts shiny with blood. She was in labor. She was in trouble.

“I’ve tried everything,” said Milt, “One of the piglets is dead, and breach. Trouble is, there are three more behind it. The canal is blocked. In moments those piglets will die.”

Dad quickly knelt beside his friend. He tried to shove his hands up her insides. Like Milt’s, his hands were too big.

Then came a moment etched in my brain. Together, our dads turned to Mike and me. We were wide-eyed, transfixed by the bloody struggle.

We knew without knowing…the look in their eyes. Our hands were not too big!

“Guys,” Dad said, “get over here, now.” There was no time to protest. Our fathers helped coat our arms with gelatinous goo.

Before I knew it, both Mike’s and my arms were up to our shoulders in a slimy, wet birth canal. There is no way to describe how weird that felt. I was scared…close to nauseous. Dad stayed right there, kneeling beside, talking me through.

“You’re going to make a difference,” he said. “You need to save four lives tonight; this mom and her young”. His words gave me the strength to go on. Mike got his hands around the stillborn, dead piglet. He rotated her body and pulled as hard as he could. She slowly came out!

As our fathers looked on, Mike and I worked out the remaining three. The mother would live, and so would her little ones. I saved the day. It’s a remarkable feeling, like none I had felt.

Those weren’t the only lives impacted that night. I had a front row seat to the miracle of birth (like it or not).

As awe-inspiring as that was, the miracle to me was my dad.

Dad, you were my hero that night.
You are my hero for life.