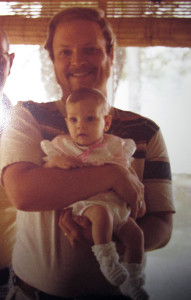 He played trumpet as a kid, but eventually moved on to guitar. I still remember the first song he played for us, He’s Got the Whole World in His Hands. Over the years, Dad played many instruments (bass, drums, Native American flute, didgeridoo), but came back to the guitar later in life. END_OF_DOCUMENT_TOKEN_TO_BE_REPLACED