Accomplished, handsome, and more than just a tad cocky, meet my father, Bob.

Thanks to Barbara Bockner for sharing her fearless memory of Dad. 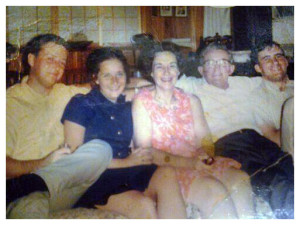 World War II was ramping up. Dad was working on the Panama Canal. Mom, a teacher, was also stationed there. They married in Panama. I was born there.

After Panama, we traveled the world. Japan, as Dad helped to rebuild after the war. Iran, though we would leave as trouble erupted over the border in Iraq. Hawaii. Germany. We circled the globe.

Dad could do anything. Except one thing. Dad refused to fly…he’d take the slow boat.

It wasn’t always that way. Dad told us the story often.

Air travel was fairly new. Planes were tiny. “Tin cans to the sky,” he said. He was standing on the tarmac in Panama, waiting to catch a flight. He and a few army guys traded jokes to pass the time.

A boy, maybe 12, was loading the bags. The pilot was nowhere in sight. The bags were finally loaded. Dad and his buds climbed inside.

Dad looked up. The 12 year old “bag boy” was flying the plane!

Too late. The plane took off. The destination: Tegucigalpa, Honduras.

One of the most dangerous airports in the world! Its narrow runway slices through two sharp mountain peaks. It’s also among the world’s shortest. Dad was convinced he’d die. He didn’t. He lost his will to fly. He stuck to it.

My parents settled in Carmel, California. I lived in Virginia. They made an annual visit. Mom arrived in hours, by plane. For Dad, it took days…by train!

Births. Birthdays. Graduations. It was a joke in our family, but it hurt, too.

There was so much Dad missed because he refused to fly. Until…

Dad was 80. It had been 45 years since the 12-year old took command. Leaving for a game of golf, he told Mom, “Not sure how long I’ll be.” This was not Dad’s style. A punctual guy, his days were mapped out.

It was Dad, “I flew to San Francisco. It was time.” Mom nearly fell to the floor.

Dad lived just seven more years. But now he was free. He and Mom flew everywhere. He never looked back.

The life lesson for me? It’s never too late to beat fear.