Peter Guza was doing what most any college kid would be doing that morning — sleeping in.

Today’s story is about Peter and Phil Guza.

His first class was at 10:00 a.m. The phone call woke him up before 9:00. It was a childhood friend from New York, bearing the horrific news.

Peter’s dad, Phil, worked in the World Trade Center. Peter ran downstairs, where the rest of his frat brothers were huddled around the television, watching in silence. The North Tower had been hit — Peter’s dad worked in the South Tower. His panic subsided only a little as he watched the terrible event unfold.

For the next 56 minutes, Peter watched the buildings burn, feeling utterly powerless from the basement of his frat house at Lehigh University, his father’s alma mater.

It was a tragic day for every American, but much worse for people like Peter, who lost a loved one in the attack.

Nevertheless, Peter remembers his dad the way he would have wanted him to.

“When I talk about my dad, I’m usually smiling,” he says. “My father was far from athletic, but one of my passions was snowboarding.”

Peter reminisces of many father-son ski trips to the Rockies growing up, just the two of them. But Phil never actually hit the slopes. He was just there to spend time with his snowboarding son — just being a great dad.

It’s been twelve years. Peter now has a son, Owen. “I’m sad he’s not here to see him,” Peter says of his father. “That’s the hardest part for me.” 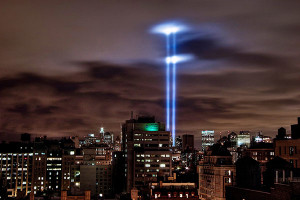 Source:
The Stir by Cafe Mom