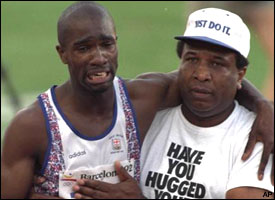 He had been forced to withdraw from the 400 at the 1988 Games in Seoul, only 10 minutes before the race, because of an Achilles tendon injury. He then underwent five surgeries over the next year. END_OF_DOCUMENT_TOKEN_TO_BE_REPLACED