“Crying is cleansing. There’s a reason for tears, happiness or sadness.”
—Dionne Warwick

Some people want you to believe that real men don’t cry.

But William Coleman, my dad, has shown me that real men cry, are compassionate, thoughtful, and carry a hankie. 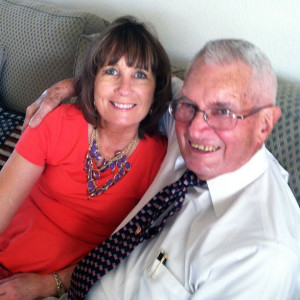 Caryn with her father William Coleman, 2013

Whatever the reason, my dad has always been able to tap into his feminine side. And, he’s shed more than a few tears along the way.

It can start with a sad movie, hearing about someone’s struggles, cheering for a favorite cause, or even while listening to the Star Spangled Banner. Ever so subtly, my dad’s lips start quivering and his eyes start to water. His voice will catch and then he’ll take a deep breath or two in order to regain composure.

I thought all dads did this kind of thing so I was never embarrassed by his actions. I learned from my dad that it was OK, even for men, to feel deep emotions and show tender moments of both joy and sorrow. END_OF_DOCUMENT_TOKEN_TO_BE_REPLACED