“All of us are born for a reason, but all of us don’t discover why.”

Today’s story is about Marlo Thomas and her dad Danny Thomas.

Daddy’s little girl had exciting news. An A+ essay at school. But Daddy was on the road. So she read it to him over the phone. That conversation changed his life. And hers. And possibly yours. 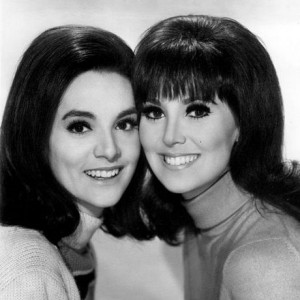 Marlo Thomas (right) and her sister Terre in 1969

Margaret (“Marlo”) Thomas has now grown up. She’s an actor like Dad.

Her dad — Danny Thomas — became a household name in his day. But it wasn’t always that way. He started his career touring small clubs as a comedian. He traveled extensively and was often away.

“Because [Dad was touring] it was like having a long distance daddy a lot of the time. And he would always call us long distance, every single night…

“…I was about in the sixth grade and I had written this essay called ‘Viva Today’. And the teacher loved it and she had me get up in front of the whole class and read it. And I got an A on it. So those were the kind of things we always told daddy when he called…”

That A+ essay. Marlo and Daddy. That night on the phone. ‘Read it to Daddy!’ said Danny, excited, enthused.

“…I don’t remember exactly the words now but the point of it was… people are so busy working hard to make a better tomorrow that sometimes they forget about today.

I used my own father as an example, that my father travels all over the country making money for his children, making their lives better and ensuring that they have a better tomorrow…

…But the sad thing is, someday when my dad comes home, his children are going to be gone and grown… 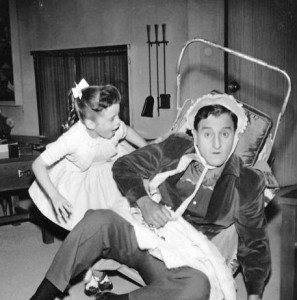 Marlo finished reading her essay to dad. On the other end of the phone, Danny was stone silent.

“I was just a kid, I had no idea that I was telling him something about our lives that was hard, that was sad.”

Then Danny spoke, in a very soft, serious voice, “Well, that, that’s beautiful Mugs. Daddy is going to have to think about that.”

What Marlo didn’t know for many years, Danny Thomas called his agent straight away. He wanted off the road. He wanted to come home.

This could have killed his career. But he made a choice. Family trumps work. He’d figure it out.

It’s interesting what you can accomplish when you make up your mind. No escape. All in. Find a way.

Danny Thomas did. He conceived of a show that mirrored his own life. About an entertainer, a family man, who’s always on the road, but misses his family and longs to come home.

“Make Room for Daddy” ran for 13 years. It was a staple in American living rooms. It ran from 1953-1957 on ABC and 1957-1964 on CBS. It catapulted Danny, and ultimately Marlo to stratospheric careers, remarkable lives.

All because of an A+ essay. Written by a bright little girl. If only she’d known.

The takeaway? Family. Work. Time away. Perhaps you can have it both ways. Have you tried?

A cool footnote: When Danny was away, Marlo & brother & sis, all slept cozy with Mom. “My mother was lonely and we were lonely for my dad,” Marlo recalls. “But when dad was about to come home she would always tell us, ‘Ok… Go to your own rooms… You’ve got to… make room for daddy.'” When producers heard it, the name for an iconic TV show and meteoric career was set.

Following in her famous father’s footsteps, Marlo Thomas is an actress, producer, author and social activist. She also serves as National Outreach Director for St. Jude Children’s Research Hospital, which her father founded in 1962.