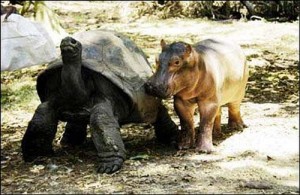 But Owen stepped in when others were scared.

Looking back, it’s hard to imagine how I survived that horrific event — a “tsunami” they said. Somehow I did. It’s been over 8 years. The tsunami killed thousands in my homeland. It changed lives, and the landscape forever. But this story is not about me. Or those who died.

Mzee adopted me. No one knows why. It’s so strange. A giant tortoise Mzee, and a hippo (that’s me)?

He can be a cantankerous guy — if you were his age, you would be too! His name means “Old Man” In Swahili. But he gave me a new lease on life. You might say I did the same for him.

Before Mzee met me, he had nobody. Being a dad made him somebody.

I liked to follow Mzee around and licked his face — he loved it too. It was the least I could do. All he had done for me; what my family would have — if they could have.

Mzee showed me where to sleep.
Which plants are safe to eat.
The best places to cross the river.

My new home is a place called Kenya, in a beautiful nature preserve. Want to see Mzee and me? Watch our video below.

What did I learn from those bittersweet years?

Dads and moms come in all sizes.
Even at 130, they can be full of surprises…

Owen was named after Owen Saubion, a young Frenchman volunteering with the Kenya Wildlife Service.

“Though I doubted he’d survive, before I drove off from Malindi, I asked the rescuers, mostly local fishermen, for a name. They unanimously chose ‘Owen’ after Owen Saubion, a tall, blonde, awkward hippy of a guy who was volunteering with the Kenya Wildlife Service. He was the only rescuer who dared to rugby tackle the hippo at a critical moment.”

“We rescued him exhausted and sunburned after four days in the sea. He was wild and angry after the local villagers and tourists on the beach rescued him,” said Dr. Paula Kahumbu.