“Many of life’s failures are people who did not realize how close they were to success when they gave up.”

Today’s story is about Sara Blakely.

Every night at dinner Sara’s dad asked, “What did you fail at today?” Sara would excitedly report back, “Dad, I tried out for this sport today and I was horrible!” Or that she auditioned for a play—and was wonderfully bad!

Dad’s response? “Way to go!” A high five came next. 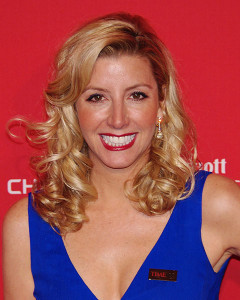 Sara Blakely’s nightly failure reports, and celebratory high fives, ended up shaping her life. It was a lesson from Dad that paid off big! This 42-year-old entrepreneur recently graced the cover of the Forbes billionaire issue. (The youngest self-made female billionaire to do so).

Sara is the founder/inventor of Spanx — special slimming, no panty-line underwear. Thousands of women around the world swear by them. Reality star Kim Kardashian wears Spanx. Jennifer Lopez does too. Over 10,000 retail locations carry the product.

There are over 200 types of the body-shaping garments, even Spanx designed for pregnant women. Spanx swimwear. Yes, even Spanx for dudes, too.

But it didn’t come easy. Sara’s success story is riddled with setbacks, failures, and lots of high fives. Wanting to be a lawyer like her dad, she scored poorly on the LSATs—twice. She spent seven years in a demoralizing job, selling fax machines door to door. She worked hard, but never did well. She tried and tried. Nothing turned out. But in her mind, each failure was just another high five — a lesson from Dad. 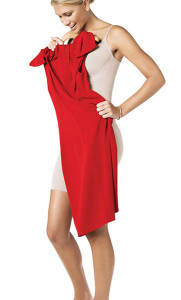 The Shape Suit — one of over 200 Spanx products

So how was Spanx born? A frustrated moment in front of the mirror. Sara couldn’t find a thing to wear under a pair of white pants.

“I cut the feet off my pantyhose and wore them underneath. But they rolled up my legs all night. I remember thinking, ‘I’ve got to figure out how to make this.’ I’d never worked in fashion or retail. I just needed an undergarment that didn’t exist.” So she invented one.

But her lesson from Dad. Failure. High fives. It carried her through. After Spanx was born, Sara was rejected by store after store. But she hung in there. Each rejection had a positive side — she could envision a high five from Dad.

“And you have to trust your gut and go for it.
And if you fail at it, that’s great!
I wish I was there to high five you!”

Find the gift in failure.

Thanks to Dad, Sara did.

Sara Blakely is the founder of Spanx, a multi-million dollar undergarment company, and the world’s youngest self-made female billionaire. In 2012, she was named in Time Magazine’s annual list of the 100 most influential people in the world.