I look at my father, I look at my son, and I understand the privilege that was handed to me, and the responsibility that I have accepted.

I had a phenomenal role model for fatherhood. Now I have to be one. 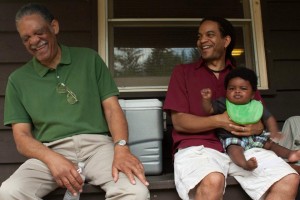 My father and mother celebrated their 50th wedding anniversary in February. They married, had three children, and stayed married. It was not, as foolish people say, “the times.” Plenty of the couples my parents partied with back in the 60s and 70s split up.

My parents’ staying power comes from will, faith, luck, pluck, and whatever other ingredients make up the stew of longevity.

Dad is a great dad. He is a big man, big in spirit, big in faith, big in family, big in laughter. I am certain, if you know the fable of the footprints in the sand, that it was my father’s footprints that remained when I didn’t have the strength to carry on. And he is a remarkable man. Dad never met his biological father, and his stepfather (who I only knew as a beloved grandfather) liked to drink and fight. With those two role models, Dad could’ve easily drifted onto a darker path. Yet somehow, he knew that wasn’t the man, the husband, the father, that he wanted to be. His strength made my siblings and me exceptions: three black children who grew up with their father in the house, with no secret siblings on the side.

My dad tells a story. During a long ago weekend when I was just a little guy, Dad got called into the office. As he was getting into his car, I ran outside with my mitt and ball. You said we were going to play catch, I reminded him. Dad got out of the car and we went into the backyard. We tossed the ball back and forth, he says, for about 15 minutes. He then headed to work, leaving behind a satisfied son who learned this lesson: a dad keeps his word.

I don’t remember any of that. I will never forget it.

I can never pay Dad back. But I can make him look good. Now it’s my turn. I will be the beacon for my son. I will stand beside his mother, the most important thing I can do, so my son learns a husband supports his wife, that a father is there for the family. I will guide him, as firmly as necessary. I will encourage him, challenge him, be his rock. I will give him something to respect, to fear, more than he fears and respects anything on the streets.

I will love him and, as long as he allows it, hug him and kiss him.

And if he ever wants to have a game of catch, my mitt will always be ready.

What did you learn about being a parent from your parents?

Meet Bob Meadows:
I’m a native Detroiter but now longtime New Yorker living with my wife and toddler son. Here are some of the highlights of my journalism career: Meeting Rosa Parks, interviewing Michael Jackson and Prince, hanging out with the entire cast of Saturday Night Live (circa 2002), and getting a private tour of the White House (look, it’s Bo!). The lowlights: None, of course!