“I am strong, when I am on your shoulders; You raise me up… to more than I can be.”

— “You Raise Me Up” lyrics by Brendan Graham

Today’s story is about Dick and Rick Hoyt — Team Hoyt.

A despicable pair ruined the Boston Marathon this year. They took lives. They grabbed headlines. 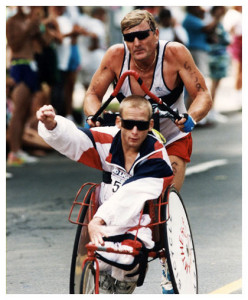 A father son pair ran the Boston Marathon this year. They inspired lives. They deserved headlines.

Since 1977, Dick and Rick Hoyt have competed in over 1000 endurance events. This was their 31st Boston Marathon together. The duo has also completed six Ironman competitions, perhaps the toughest of all athletic challenges.

Dick, the dad, is 73. Rick is 51. Impressive enough. But that’s not all. Rick is a quadriplegic. He’s had cerebral palsy since birth. He lives in a wheelchair. He speaks with the help of a computer.

He “runs” with Dad’s legs. Dad pushes, pulls, pedals and carries Rick all the way.

It started in 1977, when Rick was a kid. He wanted to take part in a 5-mile race to raise money for a paralyzed athlete. Dick pushed Rick’s wheelchair every inch of the course. They finished second to last.

At the end of that race, Rick said to Dad, “When I’m running, it feels like I’m not handicapped.”

Since that day, Dick vowed to help his son feel handicapped no more. Dick and Rick not only compete together. They biked and ran across the U.S. in 1992. That was the year before Rick graduated from Boston University, another milestone.

Watch this incredible video to see how Rick and Dick do it. In a triathlon, Dick bungees a small boat, holding his son, for the swimming stage. When they bike, the duo shares a special two-seater. For running, Dick pushes Rick in a custom-made running chair.

“Rick,” someone once asked, “if you could give Dad one thing, what would it be?”

“The thing I’d most like is for my dad to sit
in the chair and I would push him.”

Rick and Dick had to stop a mile short of the finish line this year because of the bomb explosions. A bystander gave them a ride back to their hotel. Rick’s wheelchair had to be left behind, but was found and returned the next day. 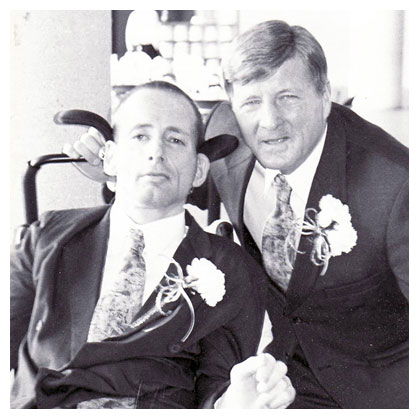 “I am happy that Rick and I have been able to share the last 34 years of doing races and triathlons together, and we plan to do this for more years to come. It has given us such a strong bond and for that I am forever grateful. We are also happy at the disability awareness that we have been able to create, and are amazed that there are so many organizations around the USA and now the world that have been created to match up runners to disabled to take part in races and triathlons together.” —Dick Hoyt, Team Hoyt