The announcement came over the school PA.

Today’s story is from Brian Hague. 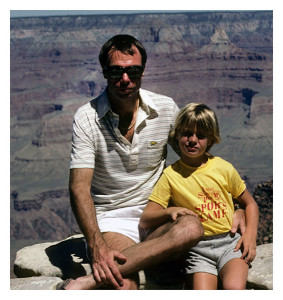 Brian as a kid with his dad, Greg Hauge

Eyes turned and focused on me. Run for the door? Slide under the desk? Is embarrassment fatal? I am now dead. It was my dad. He did it again!

My name is Brian. It’s been 23 years. I was 11. Monday morning. Fifth grade. Ms. Sullivan’s class. Two days before. Dad had taken my brothers and me to the Swap Meet. We trolled for trick stuff.

Something caught Dad’s eye, really his ear. D.J. Carlos, a Latin rapper in hip-hop gear. Selling songs right out of his van. The sign read,

Dad strolled over. I thought nothing of it. Two days passed.

Heads whipped around. Kids pointed, some giggled, some laughed aloud. Then it began. Drum machine beat. D.J. Carlos raps in: “Protein makes you grow, fat makes you slow, carbs make you go, junk food makes you say ‘Whooooaaa!” And on it went. (Dad preached nutrition since I was a kid. He was into that.)

I buried my head in my hands in embarrassment.

It was torture of Brian…planned by his dad. I glanced up. What?

My friends were tapping their feet! It was a pretty cool beat.

Attitudes changed. I was a celebrity. My dad was a hit.

Who would have thunk? Nutrition by rap? What did I learn that day? Want to make an impression? Find a cool way.

My dad taught me the value of finding a different, better way to approach life. 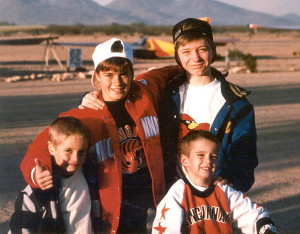 Brian with his cousin Jason and his two little brothers, Corey and Casey

Brian, now 34, is the proud son of Greg Hague, founder of Savvy Dad. Father & son work together to share stories of how fathers shape the lives of their daughters and sons.

Brian is also a talented musician. Check out his first music video. Brian wrote the tune and lyrics, recorded the vocal, and produced the video, ‘Go Gettas’ —
https://www.youtube.com/watch?v=sVz0oHk3CNM