“Worry never robs tomorrow of its sorrow,
it only saps today of its joy.”

October ’62. Cuba. Missiles. Blockade. Nuclear War? I am 14…old enough to know the mess we are in. A U.S. U-2 spy plane takes photographs of Soviet SS-5 land-based nuclear missiles 99 miles off our coast. Staged in Cuba, they are pointed at us. 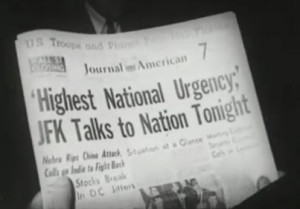 In class, our teacher graphically illustrates the effects of nuclear fallout. Day after day, we practice nuclear attack drills (essentially, we hide under our desks).

Remember the soap opera, “As the World Turns”?

In ’62, the world stands still. How do you not worry about war?

I do. Mom does. My friends do. Even my younger sister, Linda, does.

Dad doesn’t. It is like he doesn’t care. My dad, Chubby, never mentions it. When I bring it up, he listens politely, but doesn’t seem interested. Maybe Dad doesn’t want our family upset. That must be it. Saturday, October 27th. The world comes unglued.

A U.S. U-2 spy plane is shot down over Cuba. Everyone is consumed with the news. We are on the brink of war.

I walk into Dad’s office at home. He’s writing ads to sell houses! Are you kidding?

The way things look, those homes will be smoldering ruins. I have to ask, “Dad, aren’t you worried about war?” “Why?” he replies. “Why? Because we might all be dead!” Dad calmly looks up, “Greg, it’s the third circle.”

“Greg, everything falls into one of three circles. The smallest circle is on the inside. Think of it as everything you control.

What you say. When you brush your teeth. How much you study for school. Why worry? You have total control. Make sense?” I think for a minute and have to agree. “Yeah,” I say, “I see that.”

“The second circle circles the first. It’s what you might be able to control, but might not.

Like getting an ‘A’ on a test. No matter how hard you study, there is no guarantee. The questions might be bizarre, or the teacher might decide not to give anyone an ‘A.’

In this second circle, you have some control, but not 100%. Worry is a waste. Do what you can. The rest is out of your hands. Do you see?”

I have to admit. It makes sense.

“Finally,” Dad goes on, “the biggie. The third circle, circles the second, which circles the first. It’s huge. Can you visualize that?” I nod my head.

“The third circle is everything you can’t control; most everything.

Like whether the sun comes up tomorrow; or whether it snows so much they call off school. It’s stupid to waste time on what you can’t control. Cuba, the missiles, and that idiot Khrushchev are in the third circle.

So while everyone is worrying like mad, I’m getting ahead, writing ads.”

This really sinks in.

No matter the circle. Why waste time? Why worry?

I go to my room, open my books, and study for school. While my classmates waste time worrying, I’m getting ready to smoke the next test, if the missiles don’t first smoke me. 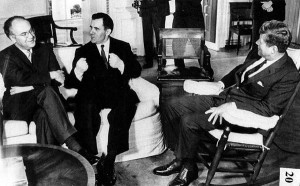