He was born above a small country store.
July 15, 1939. Hillsboro, Tennessee.

Today’s story is from Calvin LeHew. 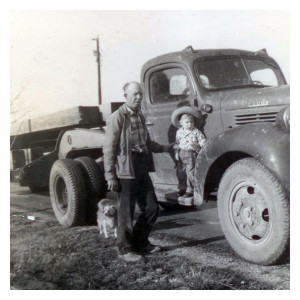 Alton ‘Red’ LeHew with his son, Calvin.
The year? Long ago.

My dad’s parents worked into the night. Money was tight. The elementary school was without plumbing.

His dad, Alton ‘Red’ LeHew, only finished third grade. His mom, Leola, made it through sixth. They both died of cancer when he was a kid.

From humble beginnings, today’s Savvy Dad guest rose to the top. He worked for Presidents Nixon, Kennedy and Johnson. One of his youthful goals was to make his first million by age 35. He did it at 33.

What advice meant the most?
Words from his dad…mahogany desk.
Mahogany desk?

“Son, don’t you ever make fun of anybody for anything, ever…because someday you may have to walk up to that person’s mahogany desk and ask for a job,” words from my dad, ‘Red’ LeHew.

Dad hit the nail on the head. His advice influences how I treat each person, each day.

To me, this is success principle #1.
Respect. Courtesy. They matter to me.

But Dad was determined to succeed. What he lacked in learning, he made up for with ambition and hard work. When Dad couldn’t get a job at the local lumber mill, he showed up each day anyway. He worked without a paycheck so he could learn the lumber trade. He studied everything about that business.

After a couple years, Dad was ready to start his own small lumber yard. He went to the Williamson County Bank for a $100 loan. He needed to finance a small tractor to move the logs.

The loan was perfectly safe. It was only $100. The tractor would secure the loan. Dad had lived in the community most of his life. My father was on the weak side of the mahogany desk. He really needed that loan.

A bank officer stared coldly at Dad from the power side of the mahogany. He cavalierly replied, “No.”

But Dad didn’t give up. Eventually, he opened his own lumber yard, and then a gas station, too. Because Dad had, many times, been on the weak side of a mahogany desk, he constantly warned me,

“Don’t look down on anybody – ever.” (He knew firsthand how that felt.)

“Treat everyone like the most important person in the world.”

I focus on those words with everyone I meet. Mahogany desk? “The person on the weak side today may own it tomorrow.” (He was right.)

Remember the bank in Williamson that turned Dad down? I became a Director. The mahogany was mine. I did it for Dad.