“Experience is a hard teacher, because she gives the test first, the lesson afterward.”

When I was a little girl, my mom had to go to the hospital a few times. I don’t remember why exactly, but I do remember how things were different around the house when my dad was in charge. 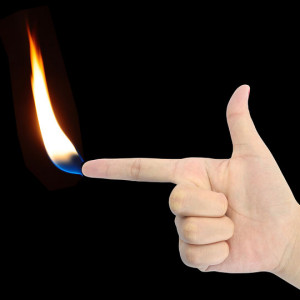 He liked to cook us breakfast in the morning, and always made us try to guess “the secret ingredient” — in our eggs, our Cream of Wheat, or our pancakes. It was usually cheese, but sometimes he surprised us with something else.

And, let’s just say he allowed us do things we weren’t allowed to do when Mom was around. There is one event in particular that’s seared into my memory, for reasons that will become obvious. Here’s the way I remember it:

It was a Friday night. We’d finished our dinner and were sitting around the table, just my dad, my older sister and me. I must have been around five years old. I know it was a Friday because the Sabbath candles were lit, flickering in the center of the table and dripping hot wax.

I took my paper napkin from my lap and wondered aloud, “Does paper really burn?” (I was curious!) Dad said, “Why don’t we find out?”

Now, my dad was a teacher. I guess he thought this would be a teachable moment for me. So he actually allowed me (under his watchful eye) to set my napkin on fire. Of course, it made an instant “whoosh” and burned in about two seconds. Dad was standing by with a damp towel and immediately snuffed out the flame, but not before I got a tiny blister on one of my fingers. 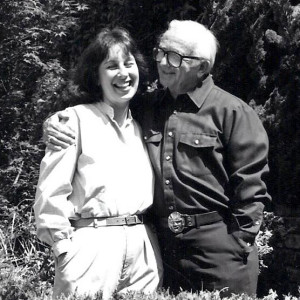 “Ow!” I yelped. He took a look at my finger and brought me some ice.

I showed off that blister to the other kids on the block who couldn’t believe my dad let me do that. Their parents certainly wouldn’t have let them set something on fire as a science experiment, which is the way I described this incident to my own kids.

The point is, he let me take a (supervised) risk to satisfy my curiosity. I wasn’t in any real danger of burning down the house, but seriously — he let me stick a paper napkin into a candle! I wonder if he ever told Mom about it.

I’ll never forget my “Does paper burn experiment,” and my dad’s calm way of letting me see for myself what would happen.

As I got older, he encouraged me to take other sorts of risks (no burnt fingers) because he believed that taking risks — no matter how things turn out — is how we learn best.

Risa Nye lives and writes in Oakland, California. Her essays and articles have appeared in local, national, and online publications and anthologies, including Fine Homebuilding, the San Francisco Chronicle, Skirt!, You and Me, and Hippocampus magazines, Chicken Soup and Not Your Mother’s Books, and Oh Sandy!

She is co-editor of ‘Writin’ on Empty: Parents Reveal the Upside, Downside, and Everything in Between When Children Leave the Nest.’ Risa recently earned an MFA in Creative Nonfiction from Saint Mary’s College. Currently, she blogs at ‘Zero to Sixty and Beyond’ and writes a semi-monthly column about cocktails under the name of Ms. Barstool for Berkeleyside.com.